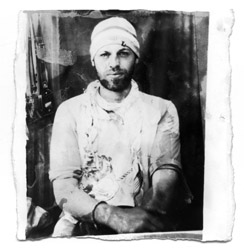 Benjamin Lowy is award winning photographer based in New York City. He received a BFA from Washington University in St. Louis in 2002 and began his career covering the Iraq War in 2003. Since then he has covered major stories worldwide. In 2004 Lowy attended the World Press Joop Swart Masterclass, he was named in Photo District News 30 and his images of Iraq were chosen by PDN as some of the most iconic of the 21st century. Lowy has received awards from World Press Photo, POYi, PDN, Communication Arts, American Photography, and the Society for Publication Design. Lowy has been a finalist for the Oskar Barnak Award, a finalist in Critical Mass, included in Magenta Flash Forward 2007, as well as the OSI Moving Walls 16 exhibit. His work from Iraq, Darfur, and Afghanistan have been collected into several gallery and museum shows, and shown at the Tate Modern, SF MOMA, Houston Center for Photography, Invalides, and Arles. His work from Darfur appeared in the SAVE DARFUR media campaign.

In 2011 Lowy's Iraq | Perspectives work was selected by William Eggleston to win the Duke University Center for Documentary Studies/Honickman First Book Prize in Photography. The book is currently available and in stores now.

In 2012, Lowy was awarded the Magnum Foundation Emergency fund to continue his work in Libya. In the same year, he received the International Center of Photography (ICP) Infinity Award for Photojournalism.

In 2014, at the age of 35, Lowy received a Distiguished Alumni Award from Washington University in St Louis.

In 2017 Lowy and his wife, photographer Marvi Lacar, won a Telly award for their Legacy short films. In 2018 the team won the National Geographic Wild to Inspire film short at the Sun Valley Film Festival.

Lowy is based in New York Tri State Area.